Quick and Easy One-pot Vegan Barley Pilaf Recipe made with Pearl Barley, Green Beans, Chick peas and Carrots. It’s a quick, healthy side dish with a little spice. This recipe has me looking at barley in a whole new light. Its so easy to work with and can be flavored so easily.

I have never used Barley in a savory recipe before and I don’t know why!

This pilaf recipe turned out so delicious that its now permanently on my Saturday lunch menu! I put all the ingredients into one pot and let it cook by itself!

What I ended up with was MAGIC!

This recipe is a fusion of Indian spices and American ingredients.  They blended so well together and I just fell in love with barley all over again.

I have to admit that I have used barley in soup only and never tried to venture into experimenting with other types of meals.  It never occurred to me that I could put it into something where the barley was full frontal and the main ingredient!

To make this pilaf recipe, I put toasted the barley with other ingredients which is what I usually do in a rice pilaf like my Brussels sprouts rice pilaf.  It makes the barley very soft and practically melt in your mouth when you eat it.

One of the derivation of the word pilaf is from Sanskrit. Pulaka, translated, means “a ball of rice” because it was normally a giant ball of rice put on a plate.  Then, everyone would eat from that ball and it was a great bonding experience.

I grew up using rice pilaf because its a very common meal in most of Eastern culture.  Every country has their own version of pilaf.  Most of the Middle Eastern and African cultures will add all kinds of beef to it.

For the Indian version, “pulau” is always made with fresh vegetables.  I like experimenting with all kinds of vegetables like corn, potatoes and even artichokes.  I also put a heavy dose of turmeric in it because I love that vibrant yellow color.  If you aren’t afraid of turmeric, then you have to try my Turmeric Smoothie Bowl.

Saffron also plays a huge part in this recipe.  It adds a nice yellow color, but, adds a nice exotic aroma to it.  If you haven’t heard me proclaim fierce proclamation for Saffron, you have to read all about it in my Saffron Yogurt Mayo recipe.

This recipe also uses Cardamom which is my favorite Indian spice because its so aromatic.

Now that you have tried this barley pilaf recipe, are you ready to try other savory barley recipes? 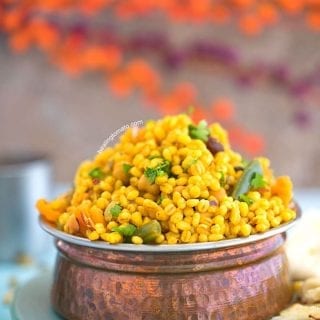 – I used Cardamom with the pods because it add so much aroma. If you don’t like the pods, just use about 1.5 tsp of cardamom seeds
– Your cooking time will vary depending on the size of the pan you are using. For best results, use a 12″ or wider pan. You can also put all the ingredients after step 13 into a slow cooker and let it cook on its own for about 3 hours or until the water has dissipated
Keyword pilaf recipes, what to make with barley