This beetroot canape with rum roasted pineapples is the perfect appetizer recipe for any gathering. Bagel bites make for a very strong base for the toppings

Is there a better combination?

It must be very evident by now that I am crazy obsessed with beets.

So, why am I so obsessed with beets?  I wish I had an answer for you!

I just love their taste  could answer that.  After all, it is a messy vegetable that likes to leave stains on anything it touches.  I even left a beet stain on a bride’s white veil! It is a true story and remind me to tell it to you someday.

This is, by far, my favorite beet recipe.  That roasted pineapple with rum is the perfect match for these beets.  They are the Sunny and Cher of toppings!

There is no base for these toppings like bagel bites.  I went with the everything bagel bites because they have so much flavor and it holds the toppings without going soggy.  They were photographed, rearranged and moved to different locations in a span of 30 minutes.  When I consumed them finally, each beetroot canape was crisp and delicious!

Just a healing tomato secret, I started with 3 serving plates of these canapes.  By the time the photo shoot was over, I was down to ½ of a serving plate.  My guests consumed some of it, but, I was the biggest culprit! I just can’t resist healthy and delicious vegan appetizers.

– Canapes comes from French language and it means “sofa“

– They are generally served at parties because they are easy to make and serve.  Also, its easier for the guests to eat them

– Canapes have also adapted into Spanish Tapas meals in recent decades.  Most common tapas recipe is to serve it with Spanish olives

The toppings list is limitless.  You can add any ingredient that you can fit on a small piece of bread or bagel.

So, what’s your favorite canape topping? 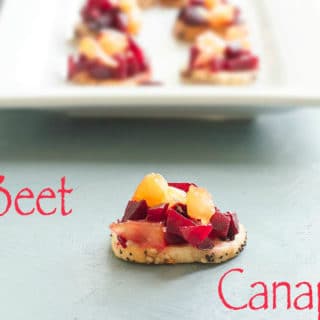 For roasting the pineapple

For roasting the beet

For assembling the recipe

To roast the pineapple

To roast the beets

NUTRITION INFORMATION IS APPROXIMATE – You will have oil mixture left from roasting both the pineapple and beets.  Save it for future use or double your beets + pineapple amounts
Keyword Vegan canape recipes, What are canapes