Never eat edamame by itself again.  This Spicy edamame recipe is flavored with Japanese Seven Spice.  In less than 20 minutes,  you will have the perfect protein snack with a kick!

Edamame is supposed to be the healthiest snacks in the world….

…. but I find them to be dull and boring!

Every time I have used edamame on my blog, I have always flavored it.  Last time, I flavored it with Thai spices and it was delicious!

The star of this recipe has to be the (Affiliate Link) Japanese seven spice!

I also found out that it is known by a few names:

🍅 Handy Tip: Do not thaw the edamame, if using frozen edamame in pods. They get soggy and messy. Cook them frozen.

How is Shichi-mi tōgarashi pronounced?

I have been trying to pronounce the main name out loud and I think I almost have it.  Ask me in another month and I just might be able to speak it like a pro.

I think it’s better I send you to a link where it is pronounced correctly by a Japanese speaker. Want to learn out to pronounce Shichi-mi tōgarashi?

👩‍🍳 Substitution tip: Traditional recipe for edamame calls for using sesame oil. Instead, you can use coconut oil or avocado oil.

How does the spice taste?

It has a very strong flavor and it completely enveloped my mouth with a delicious taste explosion!  The 7 spices are so perfectly blended to create a tangy, spicy, salty and umami flavor.

The Sichuan pepper is the one that awakened my taste buds first! They are the dominant flavor in the spice and I LOOOVED it!

You can also taste the umami flavors coming from the nori flakes. It’s the least prevalent flavor in this seasoning, but it’s definitely a very important flavor.

You know how much I love my spicy food, so, not surprisingly, I fell in love with the seasoning right away.  It’s made my miso-glazed eggplant and my Japanese stir fry with udon noodles taste AMAZING.

👩‍🍳 Substitution tip: You can use shelled edamame instead of these unshelled. Just add a little less Japanese spice.

Can you eat edamame pod?

No, edamame pods are not edible. They are very fibrous and cannot be broken down by teeth or your stomach. They are too rubbery for humans to digest. You just suck the beans out of the pod and then, discard or compost them.

What is the advantage of not shelling the edamame pods

Not shelling the pods forces you to use your teeth which has a flossing effect. That’s the rumor anyway. I have no way of proving it, lol. But, I always ate them unshelled.

Do I have to thaw the frozen edamame?

No, you don’t have to thaw them out. My cooking method will make sure that they cook evenly. Thawing them before hand just makes them soggy and harder to cook.

Can these edamame recipe be made ahead?

Yes, you can make them ahead of time. But, personally, I prefer them right out of the pan! They taste great when they freshly cooked and don’t take more than 20 minutes to cook.

Can I use shelled edamame

🍅 Handy Tip: Put it into meal prep recipes like noodles or salad recipes. They are an easy way to get your protein.

Are you a regular user of this spice?  Show me some of the recipes you have used it in. 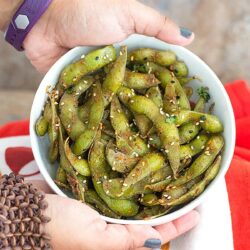 #1 Use this spice amount based on your spice tolerance.  I like my food on the spicy side, so, I put extra in this recipe.  #2 Traditionally, Japanese cooking uses canola or vegetable oil.  I am trying very hard to lessen my use of these oils which is why I used coconut oil.  Feel free to use your oil of choice TIPS
Keyword edamame in pods, how to cook edamame