Paneer Pizza made with Greek Flavors because I just had to see how Indian Food and Greek Food worked together.  I am so glad I tried it, but, this pizza turned out to be so delicious and easy.  There is also a quick recipe video which shows just how easy it is to make this pizza

Is “Indo-Greek Cuisine” a thing?

If its not, I am making it a thing.

I have always wanted to make Greek Pizza and Naan Pizza.  So, this is a 2-in-1 recipe and it was so delicious.  I was literally licking my fingers!

So, you probably didn’t come to my blog to get a history lesson on the “Indo-Greek” Kingdom (AKA Graeco-Indian Kingdoms)!

Around the 2 Centuries BC, Parts of Northwestern India (and other countries in the area) were under Greek rule.  It was founded when King Demetrius invaded the area and was under the Indo-Greek Kingdom for 2 centuries

As a result of this kingdom, there was a great deal of fusion of the 2 cultures.  That included language, fashion, symbols, coins and FOOD!

Here are just a few examples of Food that both cultures have in common:

Ok, that’s the end of the history lesson.  If you want to get more details (which I know you love just as much as I do), Here are just a few quick sources

5) How Greek Food is Similar to Indian Food (NDTV)

There are so many similarities in Mediterranean Food Recipes, Indian Cuisine and Middle Eastern Food.  So, if you like one of these cuisines, chances are you will also like the others.

I think this is only the beginning of my exploration of Indian and Greek Food fusion.  I hope to find more recipes to bring to you.

If you like hummus, try my Parsley Hummus or my Beet Hummus 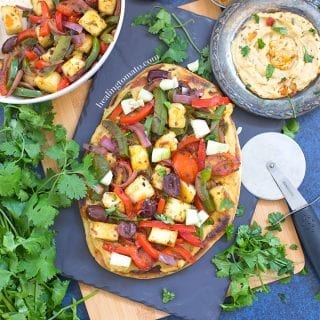 – I used a Roasted Pine Nut Hummus but you can choose any type of hummus.  – If you can’t find garlic naan, add about 1 tsp of crushed garlic before you add the onions
Keyword How to make naan pizza, indian pizza recipes, paneer recipes
« Vegan Orecchiette Pasta With Basil Pesto
Okra In A Blanket (Vegetarian) »