Quick and easy Vegan Fajita Bowls with quinoa and fresh bell peppers is a healthy lunch recipe. Put this recipe in meal prep containers and enjoy it all week. Made in only 30 minutes.

This post is sponsored by Mezetta. All opinions are my own

Are you on Team Brown Quinoa or Team White Quinoa???

Personally, I love BOTH and usually end up using a mix of both in recipes

And they look so pretty together!

Tips for making this bowl

Related: Here is how I cook frozen peas in the instant pot

What veggies to use in fajitas

Can I use frozen vegetables in fajitas?

You will have to cook them a little longer than fresh vegetables. Also, do not thaw them before hand. Put them into the pan right out of the freezer.

Defrosting them will make them limp and watery. That defeats the purpose of eating sizzling fajitas.

What can I use to season fajitas?

Fajita seasoning is the obvious and best choice for fajitas. It’s not exactly gluten-free because it has corn starch in it.

McCormick makes a gluten-free fajita seasoning mix that is the perfect flavor for it. It can be found in any grocery store or online.

Alternatively, you can season it with:

Can I make a meal prep version of this vegan fajita bowls?

This fajita recipe is tailor-made for a meal prep recipe. I suggest using glass containers to store them for future use. They can also be warmed in it. I suggest using toaster oven to heat them and NOT to microwave them.

How to make a meal prep fajita bowl

Peperoncini can do so much more than pizza

Peperoncini are not just fun to say and sit there to make your pizza look pretty!

It can change the way you flavor any dish. They add a natural tang and spice to any dish. It’s flavors are more complex than jalapeno which makes them perfect for any recipe.

This is now my favorite way to prepare vegan fajita bowls.  The quinoa is so delicious when combined with the pepporoncini.  It’s a really light lunch recipe that anyone can make and enjoy

Don’t be shy, chime in below in the comments. Let me hear your opinion on this recipe.

So, what is your favorite way to use these delicious peperoncini’s? 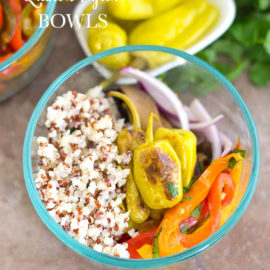 To get 2 cups of quinoa, you will need ½ cup of both clear and brown uncooked quinoa.  Add it to about 4 cups of boiling water and cook for 20 minutes.
Keyword mexican meal prep, vegan meal prep recipes, vegan quinoa recipes