Roasted fingerling potatoes in a rich vegan butter sauce with sun-dried tomatoes, onions and fresh oregano. This is how potatoes are done!! Make this a side dish or eat it by itself.  They are simply irresistible.

Can you taste the delicious sun-dried tomatoes just by looking at this picture?

I am droooooling just by looking at this photo!

More than ever before, I really wish we had smell-o-vision, so, you could inhale the wonderful aroma coming out of my kitchen when I was making these amazing potatoes!

Tips for making these potatoes

To get the maximum flavor of each potato, cut the fingerling potatoes lengthwise!  Don’t cut them into rounds or cubes because you won’t be able to taste the potatoes.

Once I figured out the best method to cook them, the next step was, “how long to roast fingerling potatoes”.  The right answer is slowly and surely!

I set preheated the oven to 400° before putting the potatoes into it.  I very lightly oiled them before spreading them out on a baking dish.  They are were in a single layer so that they all got roasted evenly.

The fingerling potatoes were roasting in the oven for forty minutes at 400°.  Roasting them slowly made them really crispy.  Keep your oven temperature at 400 and remove them when they pass the knife test.

Can you believe that they are all vegan?  Who says that vegan food is not rich and comforting?

I used vegan butter because I really wanted to make this a meal that everyone can share.  Vegans, vegetarians and meat eaters cannot resist these colorful potatoes!

Recently, I used a rich vegan butter sauce in my casarecce pasta and it was beyond delicious.  I realized that this was a good way to flavor meals without having to work too hard.  On days when I am short on time, I can whip these up in 30 minutes or less.

These sun-dried tomatoes are so flavorful and versatile, they can be used in any recipe.  Soon, I am going to post a couscous recipe which used these tomatoes.  Trust me, you will love them!

I had initially bought these fingerling potatoes for my skillet sweet potatoes recipe, but, realized that they would taste better in a recipe without any sauce.  and wanted to see what to make with them.

Since they were so easy to work with, I just had to make another recipe with them as the stars!

Why roast the potatoes?

I also fried them but that was just a giant oily mess! It was one of those cases where all I could taste were the oils and no other flavors came through.  If I can’t taste the yummy sun-dried tomatoes in this recipe, it’s goes in the FAIL pile!

Have you checked out my 5 tips on how to bake the perfect sweet potato post? Its my fool-proof way of baking the most delicious sweet potatoes ever.

What meal will be the perfect accompaniment to these oven roasted fingerling potatoes?

Potato Souffle
A savory potato souffle recipe made with russet potatoes and veggies cooked in the instant pot before baking in the oven. This quick recipe is perfect for Thanksgiving or any dinner meal
Check out this recipe

Vegan Smashed Potatoes
Moist, Fluffy, soft, buttery, herby vegan smashed potatoes are super easy to make in the oven. They are perfect to serve for Thanksgiving or as a side dish on any day of the week
Check out this recipe

Creole Potatoes and Peas
Creole potatoes and peas with a sinful amount of creole seasoning. These potatoes are cooked in the Dutch Oven and require almost no effort
Check out this recipe 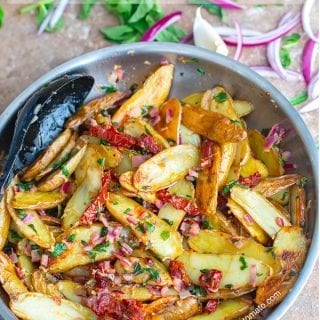 For roasting the potatoes

For the vegan butter sauce

Knife test is when you pierce the potatoes with the tip of the knife.  If the tip pierces the potatoes easily and comes out with a little bit of potato stuck on the tip, it means that the potatoes are ready.  Or do what I do, which is to carefully remove one of the fingerling potatoes and taste it. 🙂 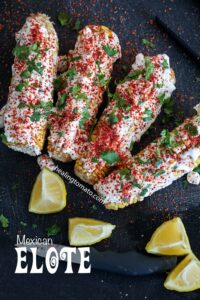 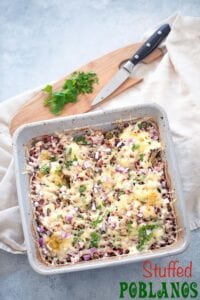 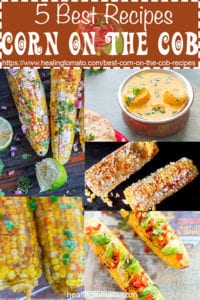 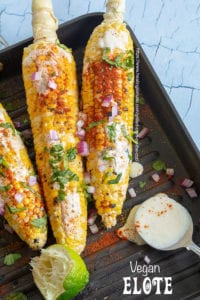