This is a quick, vegetarian recipe for Soubise Sauce. Based on Béchemel Sauce, the Soubise Sauce has an onion puree base and heavy cream.

“Personally, I don’t think pure vegetarianism is a healthy lifestyle. I’ve often wondered to myself: Does a vegetarian look forward to dinner, ever?” – Julia Child

Julia Child never understood Vegans or Vegetarians and she made no bones about it.

I would watch her show often on PBS and never thought a French food diet would be for me.  She only cooked meat based dishes and made it a point to show her disdain for vegetarians and vegans.

Whenever I watched Julia Child on PBS, I often though I could cook like her.  She was talented in many aspects of cooking, but, she had one monumental gift.

Now, I feel like I have enough experience and confidence to attempt my hand at French food.  To make my initial undertaking simple, I decided to start with something very simple.

So, I researched all kinds of French food sites and cooking blogs looking for that perfect dish to start on.

The hilarious thing is my inspiration for this recipe of soubise sauce came from the strangest place.

Some of my all time favorite shows have been Perry Mason, Columbo, Murder she wrote and Matlock!

(You are silently judging me, aren’t you?)

When these shows were on the air, I would never miss an episode (except Columbo).  In their syndication days, I would watch the episodes over and over again.  I think I must have watched every episode of Murder She Wrote at least five times.

Now that Colombo is on Netflix, I have been binge-watching it.

In “Murder Under Glass”, the Lieutenant is enamored by a cooking show personality.  He couldn’t remember the name of the sauce and kept pestering this chef.

This sauce, as it turned out, was soubise sauce!

So, here is the sauce now making its debut on my blog.

The base of this sauce is actually Béchemel Sauce which is very simple too.

Penne pasta will work great with soubise sauce.  Add a few veggies and you have a great pasta dinner.  Personally, I like making a ratatouille stack and then drenching it with this sauce.

In the meantime, here is a list of the best Julia Child quotes by Huffingtonpost

What are your thoughts on French food?

How to make soubise sauce 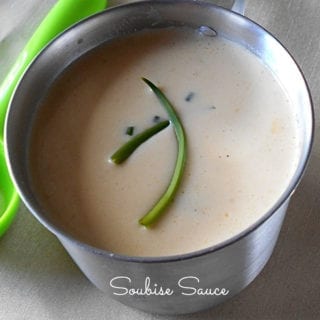 For the Béchemel Sauce

For the Soubise Sauce

For the Béchemel Sauce

For the Soubise Sauce

Keyword soubise vs bechamel sauce, what is soubis sauce?