Potato pizza is a very kid-friendly recipe. It is a must-try for all pizza lovers. The recipe is easy weeknight dinner idea for the whole family to enjoy.

Ok, be honest.  Ever since you can remember, you have had {inappropriate} dreams of combining two of your favorite foods in the world!

You may not want to admit it, but, I know of your deepest food desires.

Or could I be projecting my food dreams….

This is one of my all time favorite recipes.  I have always loved pizzas and potatoes are never far from my mind or blog.  A few years ago, I was introduced to the potato pizza at a vegan household and I immediately fell in love with the concept.

Today, I bring this recipe to the blog and hope you like it just as much as I do.

Are you a fan of combining potatoes and pizza?

How to make potato pizza

3) Slice ½ of a green bell pepper and ½ of a red onion into thin, long strips. Also slice 2 cloves of garlic very thin and set it aside

4) Take 3 medium sized red potatoes.  Wash them thoroughly and dry them. Using a mandoline, slice the potatoes as thinly as you can.  Place them in the same bowl as the tomatoes

5) To the bowl, add 2 tsp of dried oregano, ¼ cup of freshly chopped basil (I chop them in ribbon shapes) and 1 tsp of dried rosemary

7) Mix everything in the bowl and set aside

8) In a small bowl, add ½ cup of olive oil and 1 tsp of dried parsely.  Use this mixture to oil the naan

9) Take 2 naan flatbread and use a brush to oil both sides of the naan.  Place the naan on a baking tray

10) Start layering the pizza with the potatoes, one slice at a time. Layer the potatoes in a circular pattern until the whole naan is covered.  I like to keep the edges open so that it is easy to grab the slices

11) There will be tomato sauce remaining in the bowl after all the potatoes have been layered.  Set it aside

12) Bake the pizza for about 7 minutes and remove from the oven. Top it with the green peppers and onions.

13) Top the pizza with the sliced garlic cloves, green peppers and onions.  Drizzle the remaining sauce on the pizza.  Be careful not to touch the hot pizza tray.

14) Place the tray back in the oven and bake for another 7-10 minutes.  Bake until the potatoes start to brown and the green peppers turn crispy.

15) Remove from the oven and let it cool for a couple minutes.  Top with the freshly ground black pepper, if you are using it. 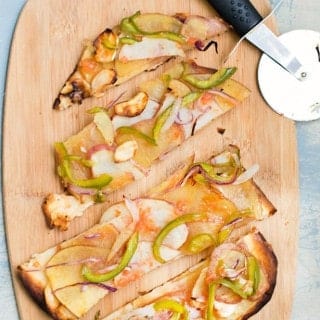 These pizza will taste just as good the next day. Nutritional value is for both pizzas
Keyword easy pizza recipes, flatbread pizza recipes