Jackfruit Chowder with Corn – This is a vegan take on Crab and Corn Chowder.  I used jackfruit to make this amazing vegan corn chowder recipe.  Its hearty, warming and delicious.  There is a nice spice kick to it.

I, FINALLY, have a jackfruit recipe on my blog!

I am so excited for it, mainly because it turned out so much better than I imagined.  I have been slow to warm up to jackfruit, but, I truly embrace it in this recipe.

– Jackfruit is a fruit grown in hot climates and its perfect for cooking in vegan + vegetarian cooking!

– The jackfruit is a HUGE, green, slightly prickly fruit that weighs about 5-6 pounds on average

– The first time I tasted a fresh jackfruit, it tasted a little like mango but on the bitter side.  I have to admit that I didn’t like it at all.  Its one of those fruits that I filed under “acquired taste”

– Jackfruit is popular among vegans (and vegetarians) because it has a meaty texture.   Many vegan recipe use it as a vegan substitute because it imitates the texture of crab meat, tuna and even chicken.

– Its time consuming to cut the jackfruit and extract the edible fleshy parts of it.  That’s why, most vegans prefer buying the canned or frozen version

– Jackfruit is very sticky when you cut into it.  The tip is to wet your knife to make sure that you can cut into it with relative ease

– The Indian state of Kerala is the world’s largest producer of jackfruit.  Its set to be the Kerala’s State fruit because its the best selling product of that country.  (Source: Economic Times of India)

– Jackfruit tree is also valued for its timber.  Many Hindu priests’ seats are made from its timber.  (Source: Wikipedia)

How to cook jackfruit from a can

– Open the jackfruit can and dump the ingredients into a colander

– Take one piece of the triangle shape and locate the cone.

– The cone part is the toughest part of the fruit, making it inedible

– Cut the cone off and discard it

– Using your fingers, gently apply pressure on the bottom part of the cone and it should fall apart.  You will get

– Do the same for the remaining pieces of the jackfruit from a can. You should get a little more than a cup worth of pulled apart jackfruit

– Its now ready to be put into the jackfruit chowder recipe or be frozen.  To freeze, wrap this pulled apart jackfruit in paper towel and place the paper towel in a ziplock bag.  Write the date and freeze.

Where to buy it?

2) Your Local Asian Grocery Store – Many of the Asian grocery stores carry both the canned version and the fresh version.  They are usually cheaper than any online cans you purchase.  If you find yourself in the Orlando / Kissimmee area, go to (NOT an affiliate link) Jason’s Best Asian Market. They carry so many wonderful Asian items, including jackfruit

3) Patel Brothers or Other Indian Grocery stores – If you have a (NOT an affiliate link) Patel Brothers near you, they are huge carriers of jackfruit cans and fresh jackfruit too.  They will always have one or the other in their stores.  Its my favorite and most convenient place to get jackfruit.  Almost all Indian grocery stores I have been to have carried the canned version, so, you should be able to find it there.

4) Amazon – Amazon is the (affiliate link) easiest place to get jackfruit in a can.  Please note that its the more expensive than the other locations mentioned in this list.

All these places sell jackfruit in brine, which is the perfect option for cooking.  Do not get the one in syrup or in water because they are sweeter, making them harder to flavor.

You can find frozen jackfruit in many grocery stores like Publix or even Target.  The frozen version of jackfruit is used mostly for smoothies and other drink recipes.  Personally, I haven’t delved into that side of jackfruit use, so, I can’t vouch for it.

Feel free to experiment and get back to me.  I am always curious about my readers’ cooking experiments

P/S: I just made a new jackfruit recipe, so, check it out today.  Its a vegan barbacoa recipe with mushrooms, mini sweet peppers, onions and jackfruit.  What do you think of it?

Can you freeze jackfruit?

Yes, you can freeze jackfruit.  Its perfect for freezing because its flavorless.  This means that it freezes and thaws really quickly.

– Make sure you pull apart the jackfruit before you freeze it.  Follow the steps I outlined above and then wrap it in a paper towel.

– Put in the freezer and it should freeze in about an hour.  Use this frozen jackfruit within 6 months of freezing

Can you freeze corn chowder?

Yes, you can freeze this jackfruit chowder. However, I prefer you just refrigerate it and place it in the coldest part of your fridge.

The reason I prefer refrigerating over freezing is simple.

Frozen corn chowder requires a little finesse when you are ready to eat it.  First, you have to heat it up stove-top and NOT microwaving it.

Second, you have to add a almond milk and some of the spices again, while you heat it.  The ice crystals will melt, making it a watery jackfruit chowder which is just not appetizing. Adding almond milk and spices will make the recipe taste fresh

Under no circumstances, do I recommend microwaving frozen jackfruit chowder! It will completely ruin the flavors and loose all its flavors

If you have corn left over, try my Mexican Street Corn Recipe made in a Taco Bowl or my Mexican Fried Rice.  Corn will never taste boring. 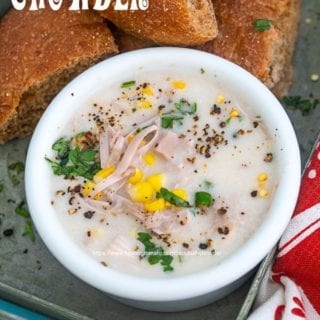 To make the Roux