Just because you and I are vegans, doesn’t mean we have to miss out on “creamed” corn, right?

So, I put together this delicious recipe and even added a few of my own touches to it.  I am willing to bet that its just as good as your Grandmother’s creamed corn recipe.

– Use a stainless steel, strong bottom pan.  Do not use a teflon based pan.

– Never let the heat go above medium for this recipe.  You don’t want the corn or veggies to burn

– Make the roux in the pan and add ingredients to it.  Here is a video link on how I made roux for my jackfruit corn chowder recipe.

– You can omit all the other veggies and make it a using just the corn, coconut milk, butter, salt and pepper.  I love the textures and other flavors bring to this recipe

– For an extra spice, you can add cayenne pepper

– This corn recipe can make a great side to my vegan mashed potatoes.  Check out my other Thanksgiving recipes that are vegan and vegetarian friendly.

What is the cream in cream corn?

It is traditionally made with sweet corn in a cream sauce which is made using heavy whipping cream.  The corn and heavy cream is cooked until it is thickened.

Some of the corn can be blended together to make an even more thicker creamed corn.  Its the perfect side dish especially for Thanksgiving.

No, sadly, southern creamed corn is not vegan.  Since the southern recipes are usually made with heavy creams or dairy products, they are not considered vegan.

Also, I have seen a couple southern creamed corn versions add bacon or bacon fat in it.

So, southern creamed corn, by default is not vegan.  But, its really easy to make a vegan version of it.  Creamed corn can be made with many non-dairy alternatives.

Can I freeze it?

No, I wouldn’t recommend freezing my recipe.  I used coconut milk for this recipe and freezing it just made it more liquid and it lost a lot of the fresh taste.

I also tried freezing it after making it with Almond milk.  It wasn’t as bad as when I used coconut milk, but, it didn’t taste good.

You can use frozen corn to make this recipe instead of fresh corn.  But, I really recommend using fresh corn because the corn is soft and practically melts in your mouth

How to make it from fresh corn

6) Add the all purpose flour, 1 Tbsp at a time, until fully blended.  Keep heat at low

7) Add celery, bell peppers and onions to the pan

8) Add crushed garlic to the pan (not pictured).  Cook on low heat for about 4 minutes or until the bell peppers have softened

9) While they veggies are cooking, add 1/2 cup of corn on the cob and 3 Tbsp of coconut milk into a blender

12) Add the blended corn to the pan

17) Add pepper to the pan and cook until it has a creamy consistency.  Will take about 5 minutes on medium heat.

Turn of heat and serve 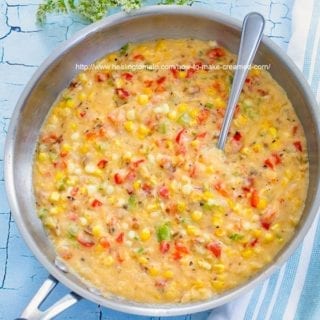 How to make vegan creamed corn

Nutrition info is approximate
Keyword creamed corn made from fresh corn, how to make creamed corn without cream