Corn on the cob is always huge in my family.

Both these recipe are good all year round, not just for summer.  Why limit the delicious corn on the cob for just summer only, right?

Tips for cooking it in the pressure cooker / Instant pot

Ok, this seems like an obvious tip.  Most of you know that its better to cook the corn without the husks.  Unlike on the grill, the husks will actually make damage the corn (and possibley the pressure cooker too).  That goes for all the silks too.

Side not: I used to refer to the silks of corn as “hair of corn” and still do that sometimes.

2) Cut into pieces before hand

The corn cooks faster and evenly when its cut into pieces.

The first time I made this corn, I put the corn directly into the container of the pressure cooker.  There is nothing wrong with that, except that the sauce didn’t distribute evenly.

Most of the sauce was spread out and away from the corn itself.  That really sucks because I like my green sauce wrapped all around my corn!

So, user a (affiliate link) pressure cooker safe basket.  It will make sure that the heat stays in the container and it distributes all the sauce evenly.

That basket is useful for cooking so many things, not just corn.  Its also perfect for steaming broccoli in the pressure cooker or cooking carrots in it.  Trust me, its $20 well spent.

I love this tip because it gives the corn a chance to absorb all the flavors of the sauce before I chomp on it!  I gave it about 5 minutes after I released the steam before opening it.

That gave the corn enough time to stop cooking and let the cilantro sauce work its way into the corn ears and crevices.

What is your favorite tip for cooking corn on the cob in the pressure cooker?

But, I am asking you to take a leap of taste faith in me.  This recipe was so good with sweet corn that I have already made it THREE times in one week.

The best part is that its totally effortless.  I didn’t have to spend more than 5 minutes it.  Most of the work was done by the pressure cooker!

So, please let your inner foodie adventurer take the challenge and try this AH-mazing corn on the cob recipe.

P/S: its all vegan, but, no one will care about that.  Its really that good!

Can you cook frozen corn on the cob in the instant pot?

Yes, frozen corn on the cob cooks really well in the pressure cooker.  My one huge tip is this: “DO NOT THAW” the corn before hand.

Pressure cooker will do an amazing job of cooking the corn on the cob while its frozen.  So, thawing makes no sense and its a waste of time.

Also, thawed corn on the cob gets soggy before you put it in the pressure cooker and that just ruins the taste of the corn.

What you will need for this recipe

How to make the cilantro lime sauce

1) In a blender, add the cilantro

6) Blend on high until its a sauce consistency

P/S: If you like cilantro sauces, you must try my cilantro pesto recipe.  Its really good!

How to make this corn on the cob

What’s your favorite corn on the cob recipe? 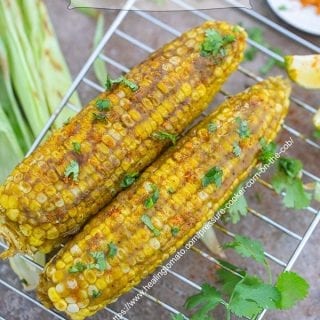 Corn on the cob with cilantro lime sauce

How to make the cilantro sauce

How to Cook Corn on the Cob in the Pressure Cooker