This Ribollita is made with veggies, beans and gluten-free bread. The soup is hearty Tuscan bread soup that warms you from the inside out!

Disclaimer: This post is sponsored by Udi’s® Gluten Free. All comments and opinions are my own.

Have you tried bread soup before?

It has such a wonderful comforting feeling just after the first spoon! All the winter blues melt away and I feel instantly energized!

The soup takes very little effort and it’s a great way to use leftover veggies.

Ribollita is a traditional Tuscan soup recipe which is made in the winter months. There are so many variations of it, but, they always have one thing in common.

All the Ribollita recipes include greens like kale, chards or spinach. The greens are a good way to add color and add some nutrition to the recipe.

The Ribollita recipes I have seen have always included cannellini beans and also navy beans. I absolutely love cannellini beans in soups like my Vegan Dumpling Soup because it adds so much texture to it.

For this Ribollita recipe, I used navy beans which are very close to cannellini beans. Last month, I made Navy Bean Soup and I realized that I need to use it more in my soups.

– Do not thaw the entire Udi’s® Gluten Free Delicious Multigrain Sandwich Bread loaf! Open the bread and remove about 4 slices from the bag

– Cut the bread while the 4 bread slices are stuck together. Cut them into cubes.

– Separate the cubed pieces of bread after you have cut them. It will make your life so much easier.

– You can use frozen spinach for this recipe. Just make sure you thaw it and drain out all the liquid.

– Use fresh tomatoes and canned tomatoes for this recipe. It will add different levels of flavor to the soup.

– Don’t add the cubed bread until about 10 minutes before serving. The bread will also double in size after a few minutes

– This Ribollita is freezer friendly, so, put it into freezer containers. Don’t include the bread in the containers.

– Thaw the soup by heating the soup on the stove-top and add Udi’s bread cubes 10 minutes before serving.

Side note: This is not the first time I have used Udi’s bread. Last year, I made a mean mushroom sandwich using this bread my readers still rave about it! Total game changer.

Why I love this Ribollita Soup

I discovered this soup while visiting a friend in upstate NY. This was in the mid-2000s and the weather was freezing!

It was one of those winters that started in the fall! It was a winter where we had a huge stack of snow and the sun was going down at 3pm in the afternoon! I was in desperate need of some comfort food because the weather was getting to me.

So, a friend of mine had her grandparents visiting for Christmas and they were coming all the way from Italy. She was well aware of my love for Italian food, especially authentic, homemade Italian food.

She invited me over and her grandmother introduced me to this soup! The rest is history!

This soup is a very warm comforting vegan soup made with all your winter favorites! I can’t even begin to tell you how you will feel after just a spoonful!

Don’t take my word for it! Make a bowl of it now and experience that feeling of being warmed down to your soul!

I never forgot that feeling and the taste of that soup. This makes me certain that you will never forget the delicious taste either…

…and you will feel like you are on a beach and its the middle of summer! 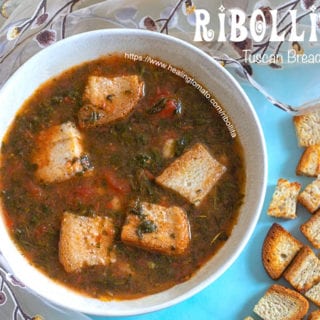 Keyword What is ribollita?, What to make with leftover bread?