This easy Navy Bean Soup slow cooker version is really easy to make! Just dump all the ingredients into the slow cooker and 5 hours later, you will have a hearty vegan navy bean soup.

Don’t you just love soups that practically make themselves?

This navy bean soup slow cooker version is the perfect “dump and cook” type of soup.

Tips for making this soup

– Make sure your carrots are thinly diced.  I kept mine thick and it took much longer to cook them.  I think if you can get your carrots to be as thin as a quarter, it will be perfect

– You can also use an immersion blender to mash parts of the soup.  Be sure to not mash everything because you will have a creamy, blended soup.

– I am not a fan of using veggie broth or broth of any kind in any of my cooking.  I used rice water in this recipe and have used coconut water in the past.  If you don’t have a problem using broth, use it in place of rice water.

P/s:  Here is how I easily make rice water

– You can use a pressure cooker instead of slow cooker to make this navy bean soup.  Choose the “Beans” option on your pressure cooker or instant pot.  Add the coconut milk at the very end.

Is it necessary to soak beans?

Soaking beans, whether they are navy beans, lentils or other grains, it is a good idea to soak them. Soaking them makes them softer and also takes away some of the lectins.

Cooking the navy bean soup stove top definetly requires pre-soaking.  Since it takes a long time to cook dry navy beans, speed up the process by pre-soaking them.

Or, you could do what I did and cook with canned navy beans which save so much time!  Sometimes, its fun to take a few shortcuts.

Why are they called navy beans?

They are called navy beans because it is a huge part of the diet for members of the US Navy.  According to Wikipedia, it is a popular ingredient in their recipes in the 20th century.

There are several other theories out there on why they are called navy beans.  However, the US Navy version is the widely accepted version.

You can also substitute Navy beans with white beans, cannellini beans, pea beans or go outside the box and use some red beans.

What can you make with Navy beans

…. and of course, Ribollita! 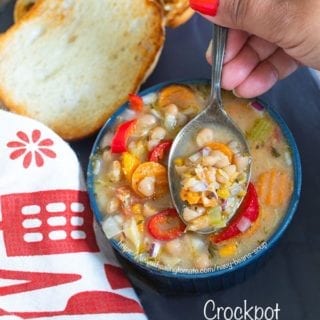 – Make sure you thinly slice the carrots.  Otherwise, it may take longer than 5 hours to cook the soup – I prefer rice water in place of veggie broth.  Use your choice of broth or even coconut water will do the trick – The video shows that the artichoke is roughly chopped.  Hopefully, you don’t make the same mistake I made.  Be sure to dice artichoke finely before adding to the soup
Keyword what can I put in navy bean soup, what spices do you put in navy bean soup