A very quick and easy Vegan Mushroom Gravy. This brown mushroom gravy is the perfect Thanksgiving gravy that even meat eaters love.

I have to say I am really pleased with this delicious vegan mushroom gravy because it was so easy to make and tastes like heaven!

– Slice the mushrooms as thin as possible.  They will cook faster and they will not overpower the gravy

– Use coconut flour because it will be a gluten-free vegan gravy recipe.  The best part is that it tastes just like regular gravy

– Use (affiliate link) gluten free soy sauce in this gravy.  I have tried it with a vegan Worcestershire sauce and it wasn’t nearly as good.  Soy sauce adds a nice tang and flavor to the gravy

I love when recipes can be made in just a few ingredients.  I rummaged through my pantry and easily came up with all the ingredients to make this wonderful gravy recipe.

This vegan brown gravy took me only 23 minutes to make.  I used small button mushrooms that I sliced really thin and then sauteed them.

The star of this recipe is the coconut

The secret to this recipe was the coconut!

There is (affiliate link) coconut flour and coconut milk in this recipe which gives this recipe its distinctive taste.

Coconut flour adds a dense texture to this gravy which will give it that slow, lazy pour! Its also affordable and gluten-free flour

I used full-fat coconut milk in this recipe and it was delicious! If you are not a huge coconut fan, you can sub it with almond milk or cashew milk too

I had never used any coconut in a gravy recipe before, so, I was a little apprehensive about it.  But, those fears were laid to rest with just one taste.

Coconut flour absorbs liquids quickly and easily.  So, I only used 2.5 Tbsp of it and mixed it with 1/4 cup coconut milk.  The last ingredients is soy sauce which brings everything together!

This vegan mushroom gravy recipe beats any vegan gravy mix that I have bought from the store in the past.  Making it at home makes it taste 100 times better.

Vegan Thanksgiving recipes is one of my favorite meals to prepare.  Everything from mashed potatoes, gravy, cranberry sauce and navy beans salad….

…there is no limit to what I can eat.

If you are looking for Plant based Thanksgiving recipes, or Thanksgiving Potatoes that are not mashed, I have quite a few for you to choose from.

What is your favorite vegan Thanksgiving recipe? 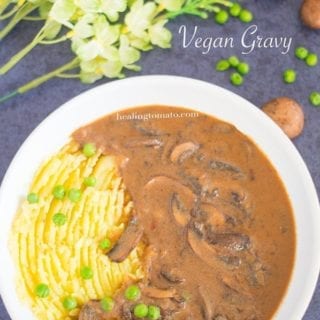