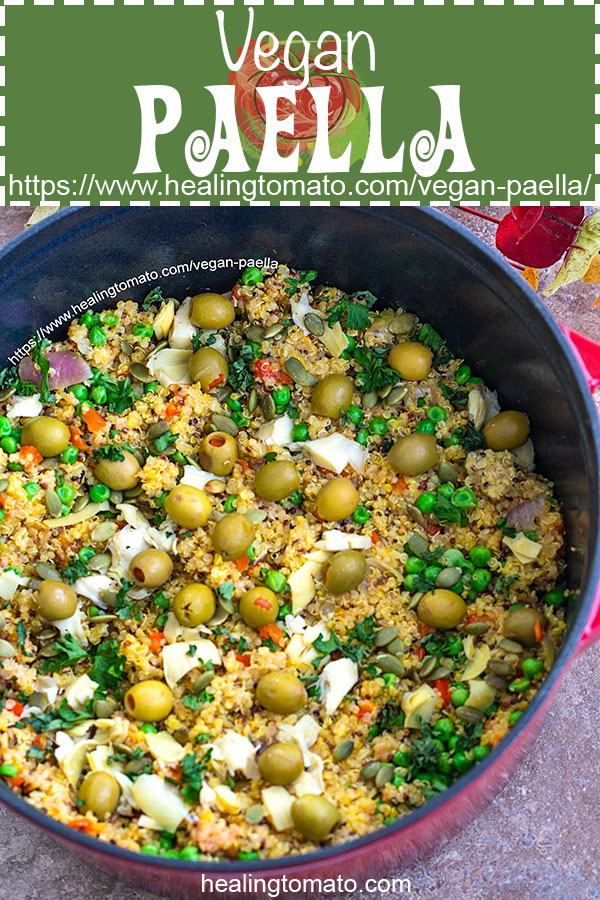 A simple vegan paella made with quinoa which I made in the Dutch Oven and it is sooo good!  The recipe takes very little effort to make with only a few ingredients.

Disclaimer: Swiss Diamond Sent me a free Dutch Oven in exchange for this post. No financial compensation was provided and all opinions are my own.

Have you been to Spain and seen an authentic paella being made?

If you have or if you are one of those people, you have my complete respect and admiration!

I have always wanted to see paella being made in Spain, especially for a crowd.  Its one of my top 5 food bucket list.

Until I have a chance to go to Spain and be a part of the authentic paella making process, I figured I would try my own version of the recipe.

Being a non-meat eater, I can never taste the authentic Spanish paella, but, I would love to see it being made.  Watching YouTube videos doesn’t do the process any justice.

Instead of using rice, I went with quinoa in this vegan paella.  Its not authentic paella because it requires rice.  However, I think quinoa would be perfect substitute.

– Paella translates to “Pan” which is derived from an old French term for “Paelle”.

– Paella comes from the Spanish region of Valencia.

Source: Wikipedia, The Spanish Table and my personal experiences.

If you like this vegan quinoa recipe, you will love this quinoa and green bean salad or a hearty quinoa and red beans Cuban style

Traditional Ingredients in a Paella

When Valencians’ make Paella, they go for the very authentic method of cooking it and that includes:

Tips for making this Vegan Paella

I made this paella stove top but it would be perfect to make in the oven too.  Add your ingredients into the Dutch Oven and place it in a 400° oven.  It should take about 20 minutes to cook inside the oven.

In my recipe, I used a medley of colorful quinoa.  However, in hindsight, that was not a good idea.  For best results, use white quinoa because the saffron color will really stand out.  If you don’t have it, you can also use brown quinoa or sprouted quinoa

The quinoa will get a little crusty or toasted.  That is supposed to happen because the traditional paella always has a crusty bottom of rice.  In fact, many chefs pride themselves in getting the perfectly toasted bottom rice.

Use premium grade saffron for this recipe.  Its expensive, but, its completely worth the price.  Plus you can make other recipes using saffron like yogurt mayo or barley pilaf

Keep the heat at an even temperature when cooking on top of the stove.  This will make the vegan paella will cook evenly

To reheat it in the dutch oven, mix a little warm water with sugar in it.  Then add this sugar water to the vegan quinoa in the pan and heat on medium for about 10 minutes

– Quinoa (or any short grain rice)

Why make paella in the Dutch Oven

The Dutch oven knows how to cook paella! It cooks every molecule of each ingredient to the perfect softness. You won’t make paella any other way after you make it in the Dutch oven.

It’s also very hands-free way of making the paella. It’s as simple as putting the ingredients in the Dutch oven and let it cook itself in a regular oven. Your quinoa is going to be so light and fluffy!

You can also make a delicious saffron rice or a hearty vegan sausage stew in this Dutch Oven. 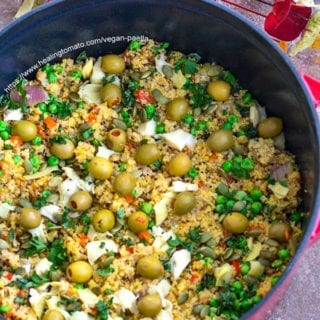 How To Make Vegan Paella

To make the Paella