Dutch Oven Creole Potatoes and peas flavored with homemade creole seasoning. This recipe takes very little effort to make that even the most cooking challenged person can make it

I made these potatoes and peas as a side dish!

However, I think I can eat it for breakfast, lunch and dinner!

I can eat the whole batch of these creole potatoes and peas! You might even see me licking the dutch oven!

Tips for making them

Why make it in Dutch oven?

The Dutch oven is fairly new kitchen gadget to me. My first use of it was when I made my Vegan Paella in it.

I saw how evenly it cooked the quinoa and I was immediately sold on its value. All the flavors were evenly distributed giving it a delicious flavor

Its incredible enamel Dutch oven knows how to cook food. I didn’t have to do anything more than dumping the ingredients into it. I think the less you do in the dutch oven, the better it cooks the food

Take my word for it when I say that I have never had such perfectly cooked potatoes like they turned out in this Creole potatoes recipe. They weren’t mushy like when I cook stove top or in the pressure cooker.

So, don’t be surprised if you start seeing more vegan Dutch oven recipes on my blog.

What makes it creole?

I had a spicy creole potato salad about 10 years ago that was so good because of all the right spices were blended together. This spices were then mixed with the potatoes to give it a very unique flavor

So, I thought I would try and re-create it, but, put my own spin on it. These Creole potatoes is more of a side dish and not a salad recipe which makes it more appealing to everyone

Creole cooking, to me, is about getting the right spice for any ingredient. I love trying to figure out what spice will go best with broccoli or squash. There is a soul-satisfying experience when eating Creole recipes

In this recipe, I also got to use the best creole seasoning recipe ever! I am tooting my own horn here because it is that good. Plus, it takes less than 5 minutes to blend the spices together which means we don’t have any excuse not to make it

I always believe that no one can resist peas! Put a bowl of cooked sweet peas in front one someone and watch them devour it! Those cute little peas make any recipe taste better

Can I make these recipe with sweet potatoes?

Can I make it before hand?

Ideally, you want to serve these creole potatoes right out of the oven. If that’s not possible, make them no more than 24 hours before hand. To re-heat, use the Dutch oven again.
Spray the bottom and gently place the cold potatoes+peas in the dutch oven. Place in a 300° preheated oven and cook for about 10-13 min. Serve Immediately
You can go the Microwave route, but, I cannot guarantee the results

Can I cook these recipe stove top?

I think these potatoes are best if cooked in a steam type environment that the Dutch oven provides. I was truly impressed by how well the potatoes cooked.
All the potatoes were cooked evenly and they didn’t turn mushy at all

When can I serve these potatoes?

I wrestled with this question myself. In the end, I think these creole potatoes are the perfect side dish to any main course meal. I thought of putting it in a taco recipe with coleslaw topping. Going to experiment with that later
What do you think about serving them as a side dish for Thanksgiving? I think it would be perfect for a Creole Thanksgiving or a Vegan Thanksgving too

What is your favorite recipe to make in the Dutch oven?

If you are like me and love cooking in the Dutch oven, here are a few of my favorite recipe I made in it. Which one is your favorite?

The classic Spanish dish made into a vegan-friendly recipe using quinoa, artichoke and olives 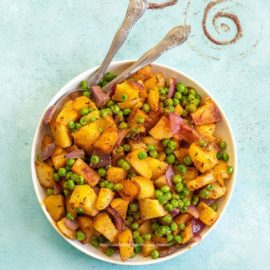