Rustic vegan apple pie recipe made from scratch using fresh apples and homemade pie crust. This is a the perfect pie to serve on Thanksgiving or any day of the week.

This is my first pie recipe on this blog!

Can you believe that I baked a pie?

What I discovered is that baking a pie is not hard. Why I was intimidated by the process?!?!

I think I might go on a pie baking binge this weekend!

Disclaimer: This recipe is inspired by Hostess At Heart’s Rustic Vegan Apple Pie. Thank you for making it easy for me to bake a pie.

Tips for making this pie

Why I love this recipe!

The main reason is that its my first sweet pie recipe on this blog. When I bake a pie at home, it’s usually just for me or a few very close people in my life who will eat anything I make. 🙂

I have never been confident to bake one for the blog. But, this time, I am really really proud of this apple pie recipe, so, I hope you like it too.

The other reason I like this pie recipe is because it is truly a delicious recipe! The flavors in the filling are in perfect harmony with each other. I took Julie’s recipe and added to it, which makes it beyond delicious.

Top this with a little vegan caramel ice cream and I am in a-la-mode heaven!

This thanksgiving, I am going to put this apple pie on the dessert table for everyone to enjoy. I am excited to see the look on their on their faces when they tasted it.

What dessert do you plan to feature at your Thanksgiving table?

Other fillings to try

As you bake this rustic apple pie, you may have questions. How to freeze it? What kind of sugar to use? Below, I answer some common questions for you. If you have other questions, please feel free to comment below.

No, most pre-baked and store bought apple pies are not vegan. They are made with eggs and/or egg wash, which vegans can’t eat.
The filling itself can be vegan friendly, if not eaten with the pie crust. I used to ask my friends to save some of the pie filling for me before they add it to the pie crust.
Finding a crust that is dairy-free and egg-free, which is a tall order! Sometimes, Whole Foods will carry vegan recipes in their frozen desserts section, but its rare. I have had better luck with Publix because they have vegan and GF pie crusts.
And, no, vegans can’t eat MacDonald’s apple pie because it has eggs in it. If you know of a company that sells vegan apple pie (frozen or fresh), let me know. I will be happy to spread the word because vegans love apple pie.

Can I freeze it?

Yes, apple pie is perfect for freezing. First, cook the whole pie and let it cool to touch. Then, cut it into slices and freeze them individually or as a whole pie
To reheat the pie, place the pie in a pie dish directly from the freezer (without thawing). Preheat oven to 350 degrees and heat it for 20 minutes. Serve immediately.

Can I make it with puff pastry?

Can I make it with a crumble top?

Yes, you can absolutely bake it with a crumble top! I love the idea of a crumble top on apple pie. I made a crumble top for my sweet tomato pie and it was delicious.
Here are the steps I took to make the crumble top. Don’t worry, it takes you directly to the steps, so you can skip all the chit-chat. 🙂
It’s also perfect for a blueberry crumble.

What kind of brown sugar can I use?

I used Florida crystals demerara sugar which is available on Amazon and big box stores. This is a vegan-friendly sugar, so, feel free to use it anytime. I love it in my beet lemonade recipe!

Have you tried a vegan cranberry loaf cake?

Got more green apples and don’t know what to do with them? Make this delicious apple butter recipe in your Instant Pot.

Start by melting butter in a cast iron pan

Add demerara sugar and swirl the pan to mix it all together. Set aside to cool

Peel the Fiji apple and the granny Smith apple

Cut them into thick wedges

Once its cooled enough, place the pie crust on it and press it down gently. The butter mixture should come up along the sides of the cast iron pan

Add the apple mixture to the pie in the cast iron pan. Make it leveled so that the apples are not sticking above the pan. Add pecans for a nice crunch.

In a small bowl, make the butter mixture to brush on top of the pie. Melt the butter and sugar

Add a pinch of cinnamon and mix well

Place the top pie crust on the cast iron pan. Cut a few slits on top to let air escape

Brush the top of the pie with the melted butter. Brush the edges with almond milk too. It will make them crispy

Place the pie in the 350° pre-heated oven on the bottom rack. Place an empty tray at the bottom of the cast iron pan to catch all the juices that come out of it.

Bake for 1 hour and broil for the last 7-10 min. Remove the pie and let it cook before serving 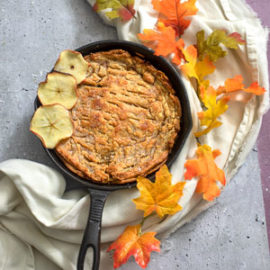 For the vegan pie crust

For the pie filling

For the skillet bottom

Make the skillet base

To make the pie filling

Remove from the oven and let it cool for 30 minutes to an hour. Serve immediately or refrigerate it.